Disclosure: This post is sponsored by Nordgreen and contains affiliate links. Learn more.

In the world of watches, a lot of glory goes to the automatics—but what about our old friend, quartz? There are so many benefits to the movement type, but nobody seems to talk about them.

We thought, forget that, and put together this list of the five best quartz watches under $500 so you can find a reliable timepiece that looks great, too.

And the invention of the quartz watch.

Since then, quartz watches have become ubiquitous, and for good reason: they’re usually inexpensive, easy to maintain, and keep accurate time.

What’s not to love?

To honor the groundbreaking movement, we put together our favorite quartz watches under $500.

5 Best Quartz Watches for Any Occasion

The Native is a minimalist delight, with a simple dial and a slim case. We’ve been longtime Nordgreen fans because of the brand’s dedication to eco-minded initiatives and their support of communities in need.

Drafted by the famous designer, Jakob Wagner, the Native strikes a balance where it fits equally well in dressy situations as it does casual.

With “invisible” indices and a domed sapphire crystal, what first appears minimal is really a masterwork in subtlety.

Over 1,400 reviews for the Native give it a 4.8-star average. The style and design come up as a major positive consistently throughout reviews, though a few commented that there’s a good deal of reflection from the crystal which makes the darker dials difficult to read.

In our Nordgreen review, we noticed that with another Nordgreen model, the Pioneer, but not so much with the Native.

For versatile minimalist quartz watches, Nordgreen is a must-know brand. While the Native is their best model in dressy situations, they have other minimalist designs that are worth checking out.

The Japanese Miyota movement at the core of the Native is an affordable powerhouse, so you can expect this timepiece to keep ticking for years and years.

The Nordgreen Native is a beautiful minimalist watch. Even with 10+ watches in my collection, I find myself reaching for this timepiece many times a week. It’s subtle and slim but looks rich and elegant.

If you’re ok with a little complication, the Citizen Eco-Drive Promaster Nighthawk is a stellar pilot watch that’s the opposite of Nordgreen’s minimalist design.

We’re having a hard time thinking about what else you could put on this dial.

Citizen pioneered the solar watch movement with their Eco-Drive quartz caliber and the Promaster Nighthawk is a value-packed example.

Reviews on Google for this watch average a 4.8 with over 150 entries. Citizen has been a major player in the watch industry for decades and their track record is well known. The only negative comments discuss shopping with certain stores. We recommend Jomashop as they have excellent discounts, a killer warranty, and quick shipping.

We can practically guarantee that any quartz-watch guide on the web is going to have a Citizen somewhere on the list. Our favorite Citizen model with the Eco-Drive Promaster Nighthawk. The solar powered movement means you never have to change the battery and your watch never stops. That’s hard to beat.

Citizen is your go-to brand if you love complicated dials and technical marvels. If you want a rugged and supremely functional token of horological history, check out the Promaster Nighthawk.

The Hamilton Khaki Field watch is an icon. Most versions are automatic movements, but Hamilton released a Swiss quartz version for the guys who don’t want to set their watch every other day.

The Khaki Field is a robust, compact timepiece that’s a pleasure to take into the backwoods for long hikes and camping trips. And with a precise Swiss quartz engine, you’re combining all the benefits of precise timekeeping with the legacy of quality you get with Hamilton.

The Hamilton Khaki Field has a big following in the watch world, so most people who review it just reiterate why they love the watch. There are a few negatives, mostly mentioning the reflective nature of the glass. If you’re out in the middle of the day, this watch can be tough to read.

The Hamilton Khaki Field is a great looking piece that’s rugged and ready for the outdoors. Built with a Swiss quartz movement, this dependable watch will accurately keep time for years and years.

The Hamilton Khaki Field is beloved by the watch community because it's tough, reliable, and the price is right.

This is the high-end of quartz watches. The Seiko Prospex dive watch is a beast—the kind of watch you can use in a professional setting when there’s a lot on the line.

Built with the powerful V157 Seiko quartz movement and a 10-month solar charged battery reserve, this watch will keep ticking for decades with no upkeep.

Decked out with 200 meters of water resistance and a hardlex crystal, it’s a shatterproof workhorse.

With over 75 reviews on Amazon, the Seiko Prospex averages to a 4.5-star rating. There are a lot of positive comments from the diving community, including remarks on the powerful lume, easy-to-read dial, and overall sturdy build quality.

Seiko is known for their value-packed timepieces, and the Prospex performs again. This beefy dive watch has subtle design features that make it perfect for when you’re gliding under columns of kelp. The powerful lume and hardlex crystal are easy to read in any condition.

While 200m is light for a dive watch, the Seiko Prospex will satisfy most divers with its improved visibility. 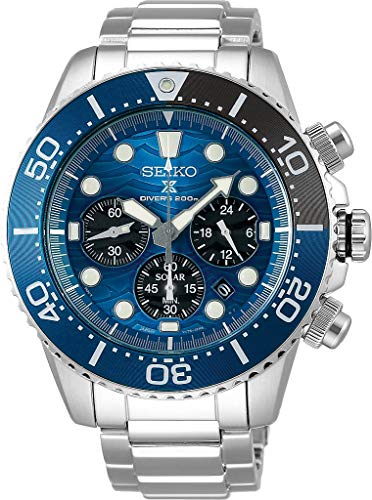 The Seiko Prospex is a beast of a watch---with 200m of water resistance, it's a true dive watch. With a Seiko solar-quartz engine, you can expect this timepiece to keep ticking for decades.

Based in Venice, California, the new brand VAER can’t keep their C5 field watch in stock. With a Swiss quartz movement, domed sapphire crystal, 100m water resistance, and simple USA-built field watch aesthetics, this watch is an incredible value at under $200.

We reviewed the VAER C5 and its discount cousin, the S5, a few months ago, and we’re glad we picked them up when we did. They’ve been struggling to stay in stock since.

Built to withstand punishing surf, this watch-lovers watch is worth looking into.

Over 1,500 reviews rate this watch a 4.8 out of 5. Across the reviews, it’s clear that people are satisfied with the quality of the timepiece. There have been some shipping delays in the early to middle of 2020, so the few negative comments in the reviews center on that.

In our view, delayed shipping is forgivable given the circumstances, and we’re only concerned with getting a fantastic watch.

The USA-built VAER C5 packs an incredible value. With a domed sapphire crystal, Swiss quartz movement, and classic field watch aesthetic, there are few other brands offering the same kind of quality under $200.

Featuring a Swiss Ronda movement, domed sapphire crystal, and coming with two straps, this military-inspired field watch by Vaer is easily one of our favorite affordable timepieces.

Why Choose Quartz Over Automatic?

Even though automatic watches are beloved by enthusiasts, it doesn’t mean a self-winding or automatic is the best option for you.

Quartz movements generally keep their time more precisely than automatic movements. Because they run on a battery, quartz movements get a consistent flow of energy, whereas autos wind up when you’re active and slowly lose power until the next time you move around.

If you’re not interested in resetting your watch nearly every time you wear it, then a quartz timepiece is the ticket.

The downside to quartz is that you must swap out the battery every year and a half or so (unless you choose a solar model). These batteries are cheap, and you can have the entire process done by a local jeweler for around $15.

Enthusiasts often prefer automatics because of the complicated engineering involved. Now that we have phones, keeping perfect time couldn’t be easier, so it’s really about how ingenious the engine is, rather than the result.

However, many automatics have power reserves of fewer than 48 hours. That means you’ll have to reset the watch if you don’t wear it at least every other day. A quartz timepiece will still tick even if you don’t wear it for 6 months, and there’s a good chance it’ll still be accurate.

If you want a fantastic all-around quartz watch that pairs with a suit and plays nicely with jeans, check out the Nordgreen Native. The slim case and refined domed sapphire crystal look sophisticated and sleek, and the Japanese movement is a workhorse.

Exclusive Discount Available
Nordgreen Native
(Get 20% off with code THEADULTMAN)

The Nordgreen Native is a beautiful minimalist watch. Even with 10+ watches in my collection, I find myself reaching for this timepiece many times a week. It’s subtle and slim but looks rich and elegant.

If you’re interested in more beefy rugged watches, the tool watches from Citizen, Hamilton, and Seiko are each uniquely equipped to handle extreme conditions.

And if USA-built means something special to you, check out the VAER C5.

With any of these quartz beauties, you can’t go wrong. These really are the best of the best.

If you’re burning for more watch content, head over to our YouTube channel and check out the reviews of our favorite new timepieces.

What is the most accurate quartz watch?

The Citizen CTQ57-0953 Chronomaster is the most accurate quartz watch. It’s difficult to find and costs several thousand dollars, but it loses fewer than ten seconds per year, which is insane.

In general, quartz watches are great. Of course, there are terrible quartz watches available that break easily and don’t keep time well. We recommend sticking with either a Japanese or Swiss quartz movement to get outstanding quality.

Should I buy an automatic or quartz watch?

Automatic watches often cost more and are less accurate. Of course, they’re also fun to own because the engines are so unique. If you’re buying your very first watch, we recommend quartz, because it’s easy to own and they’re usually solid workhorses. But when you get your second watch, make it a nice automatic.

Navigator through the world of beard oils, boots, and bow-ties. If I could only wear one outfit for the rest of my life, it’d be slim blue jeans, green fitted oxford shirt, Chelsea boots, and a nice watch.