15 Different Types Of Tie Knots: Mix It Up With These Classic & Fancy Styles 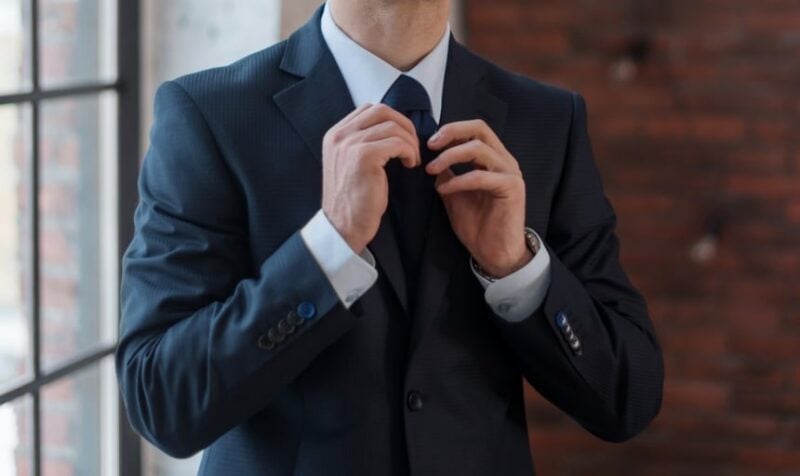 I’m the kind of guy that notices your tie.

And try as I might, I judge you for how you’re wearing it.

Ties are one of the few places where a man can show some individuality and class. And it’s for this reason that they easily earn their place on our list of 50 things every man should own.

Let me be clear, though. There’s nothing cool about wearing your tie at half-mast. It just looks your mother made you put it on in the first place. Let your tie make a good first impression for you.

Here’s a list of different types of tie knots to consider. They run the gamut from easy to difficult, classic to unique. I skipped knots that look exactly like other knots because if you can’t tell at first glance that it’s something special then there’s really no reason to learn how to tie it in the first place.

The Four In Hand is the easiest knot in the book and is definitely the best place to start.

If you don’t know how to tie a tie – start here, and start now. The Four In Hand is easier than tying your shoes. It should also only be worn until you can figure out how to do something more interesting.

The Half Windsor is the obvious step up from the Four In Hand.

It is an important part of your tie tying education. If this is as far as you make it then at least you have two options to choose from. This is a safe knot to choose for work because it is a classic and doesn’t show off.

The Windsor knot is out of fashion in many circles, and I can’t figure out why.

Maybe because it’s a holdover from too many boomers dressing in their Sunday best. It takes more skill to tie a full Windsor than either the Four In Hand or the Half Windsor, and it fills out your collar quite well.

Instead of trends dictating the knot I wear, I let the tie decide. Thick silk ties are going to look ridiculous in a Full Windsor because they’ll be as big as your neck.

That said, the small wool tie that I wore in the Royal Canadian Air Force looks sloppy as a Four In Hand or Half Windsor. There, I said it.

Fancy Tie Knots (Not For The Faint Of Heart)

The difficult part with these next knots will be choosing the appropriate tie. Like with the classics, let the tie speak to you and choose the knot. Some thicknesses and patterns just aren’t going to work as a Fishbone, but they will make for a mesmerizing Trinity.

The Eldredge knot, as someone once told me, “is called the Merovingian in modern parlance”. Shame he was referring to the Ediety knot. And anyone using the phrase ‘modern parlance’ shouldn’t be arguing with me about using the classic names for things.

This knot has been brought back to the forefront by The Merovingian in The Matrix Reloaded. The fun part about this knot is that it looks like your tie is wearing a little tie. Isn’t that cute? I mean, uh, it looks ballin’.

The Trinity knot is meant to look like a Celtic Trinity Knot, or Triquetra. It does a passable job, but don’t let the Celtic associations turn you off from wearing this if you have a different heritage. It has a fantastic circular feel that most knots can’t pull off.

The Van Wijk has the honor of being designed by an actual artist. A variation on the older Prince Albert knot, the Van Wijk is meant to be the tallest knot possible, sporting a triple twist.

The Fishbone knot is quickly becoming one of my favorite knots, beating out the Eldredge. It has the same clean lines that make a solid color bold and interesting, but also carries an unbeatable symmetry.

When done properly, the Truelove knot resembles a heart. At the very least, the four distinct quadrants set this knot apart. With a striped tie and some patience, an optical illusion is almost possible by lining the stripes up perfectly.

The Krasny Hourglass knot looks like something someone created by trying too hard. Basically a Four In Hand knot with a vertically flipped mirror image hanging below, the Krasny Hourglass is likely to garner more questions than compliments.

The Cafe knot has an impressively long history, reaching back to the early 20th Century when it was worn by people frequenting, you guessed it, cafes. I like it for its overall symmetry and because it looks like a Full Windsor inside out.

The Onassis knot is probably not something I will ever wear, but it needed to be included on this list because of its sheer originality.

The knot itself is hidden behind the long part of the tie, so it looks like you forgot to tie the knot and just pinned it to your collar. Reserve for those pretentious occasions when everyone is going to be pulling out their Merovingian.

The Four Rings knot is meant to have a loose and puffy look, which is a big part of the reason I like it. I’d probably spend way too much time in front of the mirror poking and prodding at it like I do my bow ties.

In A League Of Their Own

Previously reserved for Black Tie events, the bow tie has made its way into semi-formal wear. Find one in a bold colour or pattern that’ll make you stand out. I mean, stand out more than being the guy wearing a bow tie outside a formal event.

Anytime you see someone wearing a bow tie be sure to ask them the super secret pass phrase: “Bow ties are cool.” Acceptable responses include “bow ties are cool”, “geronimo”, or “I have more in my TARDIS.”

All joking aside, this is one of the most difficult knots to tie. Partly because it is shaped different than other neck ties, partly because most YouTube videos can never show you how to do the hardest part to finish it off. This one does a pretty good job:

The fun part about bow ties is that they are a work of art. Play with it, pull at it, make it your own. But whatever you do, skip the fakes.

As a wise man once told me, “If you can’t pull it apart to look like Dean Martin at the end of the night, then what is the point?”

Andrew Newton is a writer and photographer based in Canada. He and his wife write about raising their two children and the struggles of parenthood on www.thegoodthebadandthebaby.ca.