Every dude would like to have a toned core.

You may have the biggest arms in the world, but once the shirt comes off and your stomach looks sloppy, it just isn’t as impressive.

With our core-busting 6 pack abs workout routine, you’ll be well on your way to making your core one of your strengths instead of a weakness.

And the best part? You won’t need any special fitness equipment to get your abs popping.

And you can finish this workout in just 10 minutes, so you’ll get the most bang for your buck as every second goes by.

After all, it’s possible to do a great abs routine in half an hour, but who wants to spend that long when you can get excellent results in a third of the time?

There are probably a dozen different plank techniques I know of, including the straight arm plank, the low side plank, the reverse plank, and the extended plank. However, let’s focus on the basic forearm plank that most people seem to use.

Once you’ve included the forearm plank in your training for a few weeks, you’ll notice that the length of time you can hold the position keeps on increasing.

Where you might have started with being able to do the forearm plank for sixty seconds, it won’t be long before you’re up to five minutes. The problem with that is this is a 10 minute 6 packs abs workout. We want to get those abs firing away on all cylinders much faster.

To do this, you have to make it tougher by either putting your feet up on something high and/or placing them on an unstable surface. If you have an exercise ball lying around, use it. If you don’t, it’s a worthwhile investment. 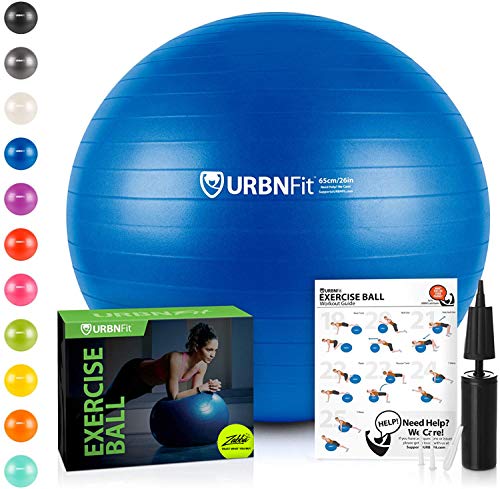 URBNFit Exercise Ball Check Best Price on Amazon Read Our Review
If you click this link and make a purchase, we earn a commission at no additional cost to you.

Otherwise, use couch cushions or stack up a bunch of pillows. It just has to be something sort of wobbly so your stabilizing muscles are at work and training your abs harder and quicker.

Further Reading
How to Get Bigger Forearms in One Month: Look Out Popeye

When I was young, I always thought my dad had Popeye like forearms. It set me on a journey. Learn how to get bigger forearms fast with these 5 simple tips.

Rest: 15 seconds between each set

The dead bug is a favorite of people who love to train their abs consistently. If you aren’t familiar with this exercise, this might look like something you did in elementary school during a game of freeze tag, but it surprisingly is a perfect ab workout.

With your back on the floor, lift both your arms and legs up in the air and hold them there. This will train your abs just by doing this.

However, once you get really good at dead bug, start lowering your arms and legs to the floor and bringing them alternately back up over top of you. This movement will make the exercise even more difficult.

Your obliques, rectus abdominals, and transverse abdominals may not be thanking you right away as they could be a bit sore the next day, but that soreness will disappear after you have done the dead bug movement a few more times down the road.

If you have neck and back issues and tend to avoid the regular crunch exercise, the reverse crunch could be exactly what you need to ease your pain. (In fact, there’s a plethora of supposed factual information stating why you should avoid situps or crunches because of possible spinal problems developing. Just use common sense. If you’re hurting after a particular movement and it is more than just general soreness, don’t do it any longer.)

With the reverse crunch, you’ll start off in the normal crunch position with your back on the floor. However, from there your legs will come up towards your chest while your back stays completely on the floor.

While it hits the whole six pack area, it focuses on your lower abs more than most exercises.

Rest: 15 seconds between each set

The bicycle crunch is another one of those classic ab exercises that is old school but gets amazing results. I can still remember my old gym teacher making sure we started every class with this exact exercise. I guess after all these years I have to acknowledge he knew what he was talking about!

With the added twisting movement of your elbow touching your knee, the exercise hits the external abdominal oblique muscles on your sides with every movement. If you’re interested in tightening up those “love handles”, then this is the perfect move for you.

Still, don’t think for just a second that it’s only training your sides. This is an all-inclusive 6 pack exercise.

Remember: It’s Not Just About Exercise

If you expect to have ripped 6 pack abs, you’re going to have to spend quite a bit of time zeroing in on your diet as well.

The old saying that you can’t out-train a bad diet is completely true. Your body fat percentage will generally have to be down to 13 percent or lower before all your hard work will become visible to others.

Plus, genetics plays a huge role. I have a close friend that no matter what he eats, his body fat percentage stays low. He trains abs once a year and he has the full 6 pack always on display.

It doesn’t seem fair, does it? But on the other hand, he constantly comments that his arms don’t grow such as mine do. We’re all blessed and cursed with various physical attributes. It’s up to us to accentuate the positive and work on fixing the negative.

Either way, by following this abs workout, you’ll certainly better your core, which will give you many benefits beyond just the aesthetic.

To learn how to look good with your shirt on or off, be sure to subscribe to our YouTube channel.

Ryan Crawley is a certified trainer with more than 20 years in the health and fitness industry. He has a Master’s degree in Education and has had published numerous articles about getting healthier. In his spare time, he enjoys spending time with his baby Ellie, his two dogs Flair and Smoosh, and his kitten Charlotte. Depending upon his wife’s mood, he sometimes enjoys spending time with her as well.