When you’re out and about with your guy pals, there’s always plenty to talk about, isn’t there?

But when it comes to things to talk about with a girl? It can get tricky for some guys.

Whether it’s a first date or you’ve just started talking to a girl out in a bar—sometimes your brain freezes and you can’t think of a single thing to say.

Well, a lack of confidence, mostly. Nerves and anxiety can rob you of your tongue.

How to Start a Conversation With a Girl

If you find it difficult to come up with things to talk about off the top of your head, this section is for you.

It’s important that you start a conversation with a girl on the right foot if you want her to become attracted to you.

Here are three great techniques for opening conversations indirectly. An indirect approach works because it allows you to spark awesome off-the-cuff conversations while still being yourself.

These techniques all involve starting with something personal. This makes it easier to connect with her. If you don’t start connecting right away, the conversation will quickly die and you’ll lose her interest.

Further Reading
How to Tell if a Girl Likes You: 13 Surefire Signs

Not sure if she’s into you? Or just generally want to know how to tell if a girl likes you? We’ve got you covered. Stop your guesswork and learn these 13 signs.

Check out this great video from Tripp Advice which breaks down these points:

20 Interesting Things to Talk About With a Girl

It’s good practice to have some interesting topics to bring up should the chatter run dry. Same goes with having a few go-to questions in your back pocket.

Don’t worry, we’ve done all the hard work for you. Here’s what to talk about with a girl:

It’s obvious, really. They’re right there in front of you.

Does she like what she’s got? Does she want to try yours? What’s her favourite cocktail?

What’s also probably there and should work as its own cue is music.

Don’t use this as an excuse to tell her your top 100 albums in descending order, though. Guys have a tendency to get a bit crazy when it comes to talking about music.

Ask her what she’s into. And if she says something you hate (which, let’s face it, is very likely…) – fight the temptation to spit on the floor and walk out.

You don’t want to look like an expert, though. That’ll paint you out like a couch potato. But, do ask her what she watches.

Remember – it’s not a , you’re finding out about one another. If your tastes are hugely different, perhaps you’re not a right fit.

Don’t make a snap judgement on that just because she doesn’t watch Mad Men, though.

This subject works like the last two, but – you can use it to progress to date two.

Get talking about new releases. Listen out for what movie she’s looking forward to seeing. When she says it – REMEMBER IT. Later down the line it can be your key to another meet.

Tricky topic, this one. It’ll come up, no doubt.

Don’t fear it, but do beware that it can be a touchy subject. You don’t want to brag about work if you have a good job. It looks arrogant.

Similarly, you can’t be too down on yourself if you have a slightly less than impressive sounding job role. Tell her what you do, say you enjoy it, then move things onto her line of work.

Get her talking about her hobbies and interests. Then the chat will, naturally, turn to yours. Tell her. Be passionate! There’s nothing more attractive to a woman than a man with fire in his belly about something.

Unless that thing is strip clubs, of course (usually).

Not that we wish to generalize, but there’s a good chance the girl you’re talking to will either have a pet or want one.

Furry friends will get them gushing with words and all you need do is sit back, nod and pull ‘aaaaw, cute!‘ faces. Talk about your childhood pet (do NOT cry!).

Where has she been? Where does she want to go? Can you relate to the places she names? Does she have any holiday plans? Do you?

If you don’t, you should check out our ultimate list of the best places for single guys to travel to.

Okay, so travel questions are the sort of thing your barber asks, but dammit if it isn’t a great topic anyway. Those people know more than just how to make your hair look good, y’know.

Avoid making this sound like an interview question, but it’s still a good idea for a conversation topic.

Prepare your answer and you can appear focused and goal-oriented. Drop in a mention of ‘a lovely woman’ and ‘kids’ and you’re onto a real winner.

You’re not exchanging qualification details here. But this opens up opportunities for anecdotes about school, college and uni.

What bugs the girl? What annoys you? Keep it light.

This isn’t a chance to angrily rant for 45 minutes about your boss or referees.

Sharing struggles can create a sense of bonding.

This one’s risky, though. You’ve got to judge the tone of the evening. It could turn things a bit sour. But, judge it right and talking about things she’s overcome can help the girl develop an emotional connection and build trust with you.

Again, you’ve got to the waters here.

This can give you both something to talk and agree on. On the flipside, you may find yourselves shouting at each other.

This isn’t a topic for everyone, but you may have to broach it eventually.

If you’re either a particular fan or hugely dislike these two things – you’re going to need to she how she feels about them.

Save this for once you’ve had a few conversations. Only things could turn sour. And if she’s not keen to talk about this sort of thing? Ditch the idea.

So, this one can go either way.

Maybe you’ll get her to open up and talk freely about her crazy, interesting dreams. If that’s the case, it’s an awesome topic to talk about. Dreams are usually a person’s true passions. And people love to talk about them.

Or, maybe it’s a dead end. Worse still, it could just be boring for the one listening/pretending to listen.

Keep it in your back pocket and play it by ear.

Bear with us here.

You’ve got to make sure the girl you’re talking to is relaxed and open and honest and extroverted first. And don’t open with this whatever you do.

Plus, when it’s your turn to talk – don’t get too filthy. She doesn’t need to hear about what you got up to in that barn when you working that summer job when you were fifteen.

Who does she think killed JFK? Alright, this one’s not for everyone, admittedly, but it can be entertaining.

But either way, you really shouldn’t bring up your flat Earth theory.

19. Life and the Universe

If you can’t string a few minutes talk out of a subject as huge as this, then you’re probably screwed, brother.

Have a few thought-provoking existential questions in your locker—they’re an excellent vehicle to launch into deeper topics.

Reignite the lost art of conversation and ask more thought-provoking questions. Learn the best existential questions to ask and how to do it. Let’s get deep.

But remember, guys. It’s a pretty bad idea to ask her if she’s in love with you. If you’re not sure why we’ve said that, this post is for you.

What’s So Hard About Talking To Girls?

Nothing, really. They’re just people, after all.

Alright, some of them are freeze-your-brain beautiful. We get that.

But just take a deep breath. And remember—you’re not alone. Lots of fellas struggle with relaxed chit-chat when they’re planted in a seat two feet away from women they find attractive.

Here are just a few reasons conversation can be stilted and men struggle to talk to women:

There you have it. There are a lot of topics here but don’t let that stress you out. Each one of them can lead to hours of stimulating conversation.

Do yourself (and mankind) a favor, though. Don’t talk about the weather, alright? Unless you’ve got a sneaking suspicion she’s dull.

Interested in learning how to never be boring in conversation? Check out this video from one of our favorite YouTube channels, Charisma on Command: 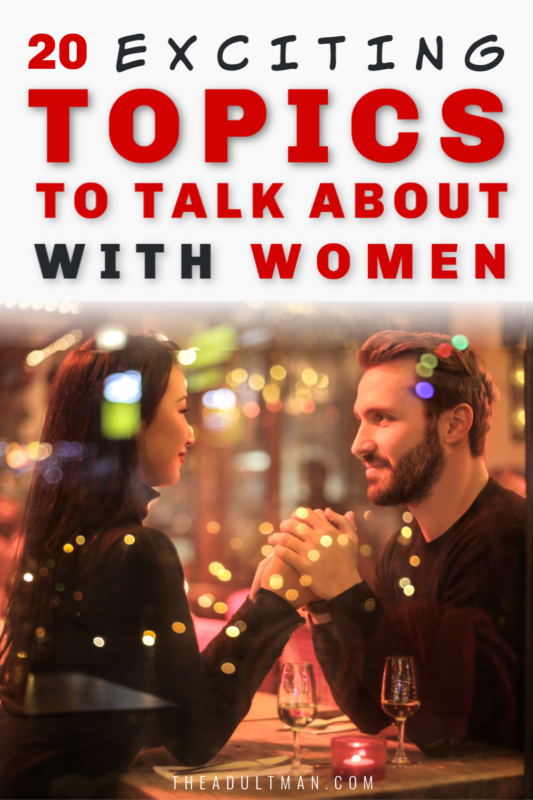 Get Our Free PDF Guide